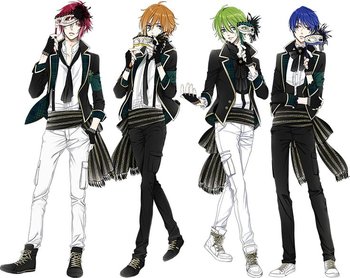 Marginal #4, or Magi4 / MG#4 for short, is a fictional idol unit from Pythagoras Productions by Rejet. They are the first of three units introduced, and the cornerstone for the rest of the Marginal #4 franchise.

Originally, they were a unit made exclusively for the 2013 RejetFes, but the popularity of the characters caught on and the rest of the Pythagoras Production characters followed suit. As singers, they're preceded by the duo LAGRANGE POINT, and have juniors in the trio Unicorn Jr. In their main situations, the Magi4 boys are joined by their manager, Yue Kataoka, who often tries to keep them on track and serves as their Love Interest in most continuities.

Altogether, the idol group has eleven singles and three compilation albums. A Visual Novel for the group co-produced by Otomate, IDOL OF SUPERNOVA, came out in 2014 with a sequel (ROAD TO GALAXY) and a Rhythm Game (KISS Kara Tsukuru Star Collection) on mobile in 2017. A Situation CD series, Idol of Starlight Kiss, began that same year.

Eventually, the boys got an animated adaptation by JC Staff, titled Marginal #4 KISS Kara Tsukuru Big Bang. A stage play was produced in 2022 by Movic Stage (of Tsukista and Identity V fame).