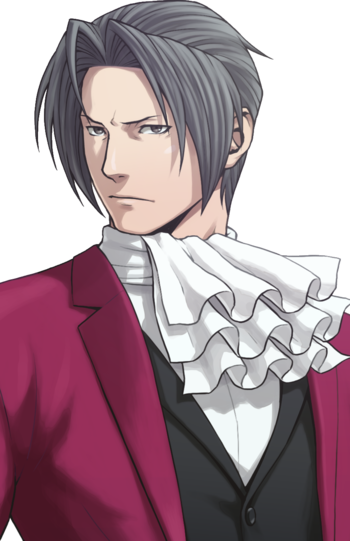 We have no "Objection!" to his fashion sense.
"B-bib?! Now see here, you uncouth barbarian! This is a CRAVAT!"
— Virion, Fire Emblem Awakening
Advertisement:

A cravat is a strip of cloth originating from Croatia that is wrapped and tied around the neck, sometimes embellished with lace or other decals. It's a predecessor to the necktie, and a common accessory in 17th to 19th century men's fashion.

It's also excellent shorthand to show your audience that a character is one rich, classy bastard.

More often than not, a character who wears a cravat will be quite a proponent of the Good Old Ways - if they're not already living in Ye Goode Olde Days, that is (which they often are). Typically, they will be of Blue Blood or The Beautiful Elite. The more elaborate the cravat is, the more aristocratic (or villainous, or just pompous) the character wearing it will be.

If a character in the modern era wants to show their status, but doesn't want to look like they popped out of a time machine, they will often wear a toned down Ascot. These have the similar connotations, just with a more modern touch.

Compare Waistcoat of Style, which the cravat is often combined with. A part of A Man of Wealth and Taste's repertoire. May be part of Awesome Anachronistic Apparel. Also see Tacky Tuxedo.

This page is specifically for the cravat that is most associated with formal period wear. The scarflike neckwear that Americans call an ascot (but what purists would call a day cravat) is actually much more casual. It was popular from The '50s to The '70s but still pops up occasionally.