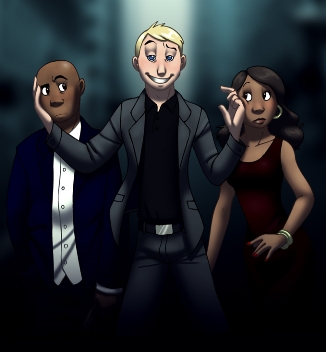 is a comic done by Humon, of Scandinavia and the World fame.

Niels Gyldensted is a Danish mob boss in America who has a relationship with married couple Duncan and Natalie. The comic mainly focuses on Niels' life as both a violent criminal and a lover and father figure, as well as exploring the polyamorous relationship between Niels, Duncan, and Natalie. There are occasional story arcs, but they're relatively short, and the comic is more focused on relationships than on an overarching plot.

Other important characters include Elliot ("Kiddo"), Duncan and Natalie's child; Peter, an insane hippie rapist and leader of a cult; Agent 300, a James Bond-esque secret agent who flirts with Niels just a little too much; Thomas, a detective who lost all interest in catching Niels when his wife died; Wendy, Thomas's daughter; and Caron, Thomas's partner who is determined to re-motivate him and defeat Niels.

Recent additions to the cast include Billy, a very masculine woman and a family friend of Niels, Duncan, and Natalie; her bodybuilder girlfriend Rose; Agent 250, an extremely badass, extremely manly agent who is tasked with keeping Agent 300 focused in his job — and who, eventually, befriends him; and Niels' son Magnus.

The comic has not updated since June 2015.