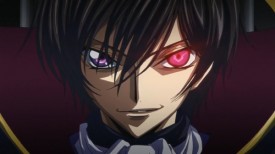 Pictured: Lelouch on a good day.
"Os quoque parce Erigitnote "Uplifts her face with moderated cheer" (a quotation from the Psychomachia of Prudentius) — nothing could suggest more vividly the smirk of a persevering governess who has finally succeeded in getting a small boy in trouble with his father."
— C. S. Lewis, The Allegory of Love
Advertisement:

This is the character who always has an infuriatingly smug expression on his face. He thinks he's better than you, and it shows. He may not be a Smug Snake entirely; either he's not a proper villain (just an annoying jerk), or he's only disdainful to certain people (mostly The Hero).