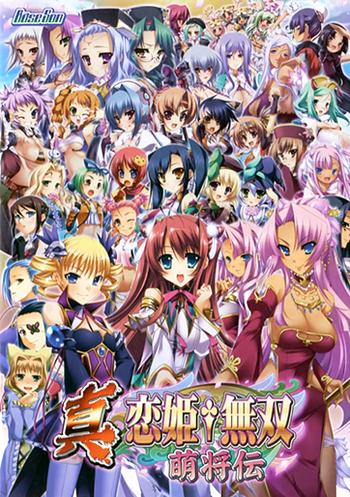 When Ordinary High-School Student Kazuto Hongo chases after a thief, who steals and breaks an ancient mirror at his school campus, he's transported back to ancient China. Are we good so far? Now, take the Romance of the Three Kingdoms story and Gender Flip nearly all male characters from the original epic into action girls of varying degrees of affection for Kazuto, and you get the perfect harem Visual Novel called Koihime†Musou, developed by BaseSon. All principal heroines in the game are expies of the (male) generals from the original epic and the former's names are derived from the latter's by reading the original Chinese characters in their names as kanji. Additionally, all of them have a true, "private" name usually reserved for close friends, and several sport a courtesy name

A remake of the visual novel Shin Koihime†Musou was released with more characters added in from Romance of the Three Kingdoms and following suit by genderflipping them. Not only does it pay more attention to the original epic but it also allows players to choose which faction to ally with, rather than the preset one in the original game. A third and possibly final installment for the visual novels was released on July 23, 2010, entitled Shin Koihime Musou ~Moeshouden~, with the intent on dropping the battle sequences found in prior games for the purpose of focusing entirely on the Unwanted Harem aspect.

Two Spin-Off games exist in the franchise. The first one, Otome Taisen Sangokushi Engi, is a fighting game for arcade machines and PC. It was adapted for PlayStations 3 and 4 on January, 2016 under the new title Koihime Enbu. Degica games has released this adaptation for overseas PCs via Steam. The second, Web Koihime†Musou: Battle Maidens, is a web-based strategy game, free to play with microtransactions. It's been jokingly said that it is like Evony, except that it actually has girls. Plans to release the game overseas crashed abruptly when Beanfun, the distributor, had its Europe and US branches closed by Gamania, its parent company.

In 2014, a new sequel to the series was announced, Koihime Eiyuutan, which sees the addition of several new heroines, based on figures from Romance of the Three Kingdoms, and was released in 2015. Later on, three remakes of Shin Koihime†Musou dubbed Kakumei were released from 2017 to 2019, each of them focusing on the three Kingdoms of Gi (Souten no Haou), Go (Son Go no Ketsumyaku) and Shoku (Ryuuki no Taimou) respectively, closely following the storyline of Shin with heroines from Eiyuutan and a greater focus on the original epic.

is set during the Sengoku period. It stars Kazuto's nephew many years after the original, except his uncle specifically trained him to prepare for his arrival in the Sengoku period, leading to a much stronger, much smarter protagonist.

See also Suzukuri Dungeon: Karin in the Mountain, a Simulation Game and dungeon management game which features characters of the Koihime series in an entirely different genre and setting.

Tropes in relation to multiple characters or the franchise: