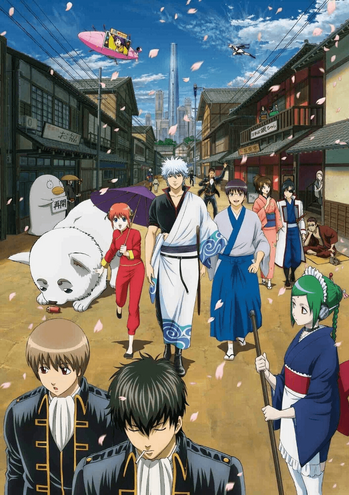 “Any adult who’d associate with this anime can’t be a decent person.” note  Kagura, dropping a truth bomb.
"Why is the sea salty? Probably because you city folks use it as a toilet!"
—One of many idiosyncratic chapter titles
Advertisement:

In an Alternate Universe version of the Edo period, Japan was not visited by American flotillas and subtly encouraged to drop her tariffs and expand her international trade — but was visited by a race of space aliens known as the Amanto, who brought with them super-futuristic know-how and gadgets (resulting in things like mopeds, TVs and robots being invented earlier than usual), a ban on swords and the fall of the samurai caste as we know it. A resistance group known as the Joui set out and declared war on the Amanto to no avail, and the samurai were all but wiped from the map. Enter Gintoki Sakata, a former member of said resistance group, feared as the “White Yasha”; once an impressive swordsman, he dropped out because in the end, it really wasn't worth it to be fighting against a bunch of stupid foreigners in the first place.

Nowadays, Gintoki makes his living as a self-appointed freelancer, taking on any job he can for cash to pay his rent, but that doesn't seem to happen very often when there's sweets and Shonen Jump to be had. Joining him in his exploits are samurai-in-training Shinpachi Shimura, who winds up taking the brunt of much of the series' abuse and leads a pop idol fanclub; Kagura, a young alien girl who spends most of the time eating, beating someone up, or just generally being an idiot; and Sadaharu, Kagura's giant pet dog that gleefully chomps on everyone and anyone. A lot.

Gintama is the oft-anachronistic brainchild of Hideaki Sorachi, who had originally intended to create a manga inspired by an NHK drama about The Shinsengumi. However, despite the historical connotations that the Edo period brings, it's a Gag Series in one of its most warped states, filled with Shout Outs to everything under the sun (even fellow Shonen Jump series such as Bleach and One Piece are not immune to lampooning), over-the-top humour, ridiculous puns, sight gags and a liberal dash of action to top it all off. Stories tend to emphasize no such thing as black and white and how that plays into the Japanese concept of honor.

After the manga premiered in December 2003, a one-episode OVA was produced for JUMP Festa. A TV series produced by Sunrise made its debut in April 2006 and concluded in March 2010, followed by Yorinuki Gintama-san (literally "The Very Best of Gintama"), which was re-runs of old episodes remastered in HD with new opening and ending themes. Eventually the re-runs came to an end and, in April 2011, the series returned with Gintama' (note the dash). That show ran until March 2012, only to return in October of the same year as Gintama': Enchousen, which concluded in March 2013.

A third series, Gintama° (note the circle), was announced and began airing in April 2015. Unsurprisingly, Sunrise opted out of producing it, and were replaced by Bandai Namco Entertainment's newly-formed animation branch, BNPictures. This series ended in March 2016, with the last episode teasing viewers with a screenshot from the next arc, implying another anime is already in the works. Indeed, a fourth series titled Gintama. (yes, period included) aired from January 9 - March 27 2017, with another series dedicated to reruns called Yorinuke Gintama airing the following week. A new series titled "Porori Arc" started airing in October 2017, this time covering the comedic and less plot-heavy chapters that were originally skipped in Gintama°'s run. The next big and final arc, "Silver Soul", was partly adapted and aired as split cours from January to October 2018; according to Gintoki in the final episode, this season was meant to be the anime finale but failed due to Sorachi needing more time to wrap things up in the manga at the time.

When the series concluded its run in Weekly Shonen Jump in September 2018, the characters announced (in series, in fact) that the final arc would be wrapping up in Shonen Jump GIGA. This ran in GIGA from December 2018 to February 2019 before moving to its own app, where it finally concluded in June 2019.

The series had two anime movie adaptations and one compilation movie series. The first movie is a retelling of the Benizakura arc, the second movie is an original story involving Gin jumping forward 5 years to a changed Edo, and the compilation movies recap the Shinsengumi Crisis and Four Devas arcs. Additionally, the series saw its first live-action adaptation film, Gintama (2017), which adapted the Benizakura arc. This was followed by a sequel the next year covering the Shinsengumi Crisis arc, and also saw two web series that aired alongside each movie (one adapting the Mitsuba arc, the other adapting several comedic stories). A third anime movie titled Gintama The Final adapted the final chapters of the manga and acted as the finale of the franchise "for real this time," releasing on January 8, 2021.

An English translation of the manga was published by Viz Media, but cancelled after Volume 23 due to low sales. The anime is licensed by Sentai Filmworks, who have so far released the first season on 4 DVD sets, as well as the movie adaptation of the Benizakura Arc on DVD and Blu-Ray. The releases are sub-only, though the movie came with an English dub and, according to The Other Wiki, Sentai was considering releasing more of the show depending on how well the movie does. Instead, Crunchyroll acquired the license and plans to release the entire series on Blu-ray and DVD with a complete English dub, startng with Season 3. The Latin American fans can rest easy too, since a dub of the whole series is planned for them as well.