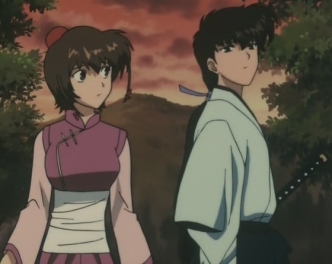 Carried by the Wind: Tsukikage Ran (Kazemakase Tsukikage Ran) is an anime series directed by Akitaro Daichi (who also gave us Kodocha, Jubei-chan, Fruits Basket, and Now and Then, Here and There), that aired for 13 episodes in 2000. It follows a basic adventure formula, with different settings, villains and people to help in every episode. The series derives most of its strength from the often humorous and dynamic interaction between Ran and Meow, who could be seen as lovely angels with a twist.

Ran is a young female Rōnin with an unmatched degree of swordsmanship. She wanders through Japan, looking for thrills and a steady supply of good sakénote  (rice-wine, in case you didn't know). One day she runs into Meow, a somewhat younger girl who has tremendous skill in Chinese martial arts and a lust for strife matching her own. Together they wind up in all kinds of adventures, ranging from skirmishes with the yakuza to helping clueless parents to duking it out with an overgrown European woman.

The series was licensed in North America by Bandai, but no one seemed to realize it at the time and it quickly went out-of-print.