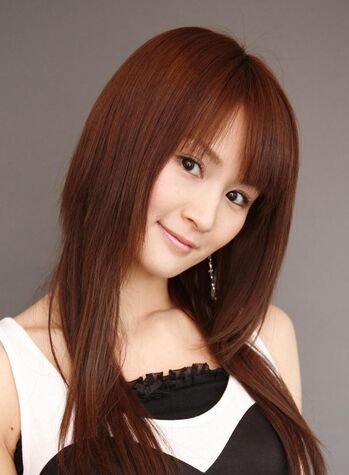 Describe Yuu Kobayashi here, or she'll sue you. Also not to be confused with the footballer of the same name.

Yuu Kobayashi (born February 5, 1982, in Tokyo, Japan) is a seiyuu known for voicing both Tsundere and The Woobie roles and has played both male and female roles. She also has an extensive history of voicing characters who harbor inordinately lustful crushes, naturally unrequited more often than not. Her deep voice also makes her a popular choice for Action Girl roles. She's also a Large Ham.

When not doing voices, she is also a singer.

Lately, some of her fans have been calling her sanity into question. For example, she can draw well. What she draws is another matter entirely. Then again, considering the fact that she's voiced a Split Personality girl in Sayonara, Zetsubou-Sensei, and at least two characters for When They Cry series, perhaps we shouldn't be surprised. Kotaku has a video montage of all of her infamous "artwork"

Fans have taken to calling her 2.5D, which is a dubious honor as they no longer consider her 3D. When speaking normally, people have noted that she has a habit of always using honorifics due to her upbringing via strict tradition.

You didn't show this article to my manager before publishing! And you're making fun of my artwork? I CHALLENGE MY FATE AND WILL SUE YOU!!! And after that, time to get back and do (bleep! bleep! BLEEEEEP!) with Sugita and—(something REALLY nasty happened) AAAAAAIIIIIEEEEE!!!!