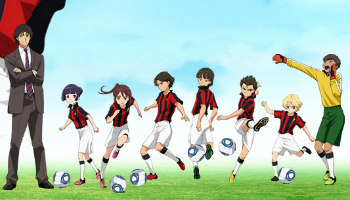 Shou Oota loves soccer. Unfortunately, his team has broken apart after the core players - the notorious Triplet Demons - had a falling out with their coach and the upcoming middle-school entrance exams had the rest of the team leaving. Resolved to rebuild his team from the ground up, he starts the search for new members. He might not be very good at playing, he may be alone, but he has two weapons in his arsenal: he never takes "no" for an answer and he never gives up.
Advertisement:

Things start looking up when he befriends Erika, an Osakan girl looking for a team, and he keeps meeting interesting people in the park like Misaki, a renowned professional soccer player, and a local drunkard who knows more about the game than is readily apparent...

Ginga e Kickoff!! ("Kickoff of the Century!!") started broadcasting as part of the Spring 2012 Anime season, and it has been slated at least for 39 episodes.