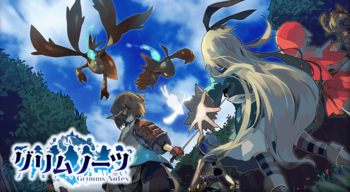 What does your fate say?
Grimms Notes (グリムノーツ) was a mobile RPG developed by Genki (yeah, that developer of racing games) and published by Square Enix, it was released on January 21, 2016 for Android and iOS platforms.
Advertisement:

The setting of the game features characters from classic fairy tales and stories, such as Alice in Wonderland, Aladdin and the Magic Lamp, and Cinderella, appear in the original game. The game takes place in a world created by a beings known as "Story Tellers." At birth, all inhabitants of this world are bestowed with a "book of fate" where all their lives are written in advance. However, rogue Story Tellers known as Chaos Tellers are writing bad events into people's books without them knowing. It is up to the holders of blank books of fate to seek out the Chaos Tellers and restore the world.

An Updated Re-release of the game was released in January 2018, called Grimms Notes Repage, which added a new main story, new characters, a new soundtrack, and many other updates.

Another one called Grimms Notes Gakuen was made available on October 17, 2018, which puts the cast in a school setting, in a totally different plot. This one can be played in the original game itself.

The game received a Western release in March 2018 by Flero Games, but was shut down in January 2019, less than a year later, on the day the first episode of the anime aired.

In February 28th, 2020, it was announced that Grimms Notes Repage will be shut down for good on April 30th, 2020, after four years of service. The closure was delayed and actually happened on June 17th, with an offline version of the app released 4 hours later, only including cutscenes and Hero episodes + their artworks and info. You can get the game for free here.

Another sequel called Project Grimms is on the works.