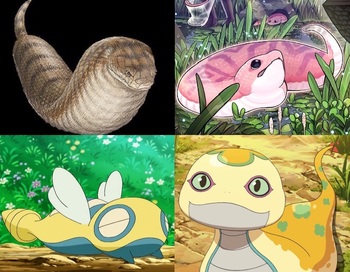 I just wanna hug him and squeeze him And Call Him "George"!note Clockwise: Tsuchinoko in Japanese Mythology, Danger!? Tsuchinoko? in Yu-Gi-Oh!, Noko from Yo-Kai Watch and Dunsparce from Pokémon
The bones were found in May 2000, in the small town of Yoshii in Okayama Prefecture. News of the discovery, according to one weekly magazine, "set off tremors throughout Japan." The skeleton was taken to a university to determine whether it really belonged to a tsuchinoko, a legendary reptilelike creature the existence of which had never been scientifically confirmed.
— Pandemonium and Parade: Japanese Monsters and the Culture of Yokai
Advertisement:

The Tsuchinoko (translated to English as "child of hammer" or "child of dirt") is the name of a small, snake-like creature in Japanese legend, known for having a disproportionately pudgy body ending in a slender, pointed tail. They are typically jet-black or dusty-brown and can be as long as 12 to 31 inches. Their behavior is noted to be strange, defying behavior seen in similar animals and even defying certain laws of physics. They can bite the end of their tail to form a wheel to travel faster to avoid predators or catch prey and they can even Double Jump by scrunching their bodies like an accordion and unloading like a spring. The tsuchinoko is a viper and thus has fangs filled with venom, but unlike other snakes, they don't hiss, but squeak and chirp instead. They are most commonly seen in Western Japan, mostly in Kansai and Shikoku.

The Tsuchinoko is classified as equal parts Youkai, mythological creatures used to explain natural phenomena like fairies and spirits, and cryptid, creatures with evidence that they may theoretically exist like Bigfoot and the Loch Ness Monster. Much like Bigfoot in America, Tsuchinoko has had a bounty for its capture by the local government of Yoshiicho Yoshi in yen to the equivalent to $1,000,000 US, with various other sightings and bounties made as far back as 712 A.D.

Gaijin Goomba (both the real person and his cartoon goomba counterpart) explain to the viewers just what the Tsuchinoko is.

Gaijin Goomba (both the real person and his cartoon goomba counterpart) explain to the viewers just what the Tsuchinoko is.