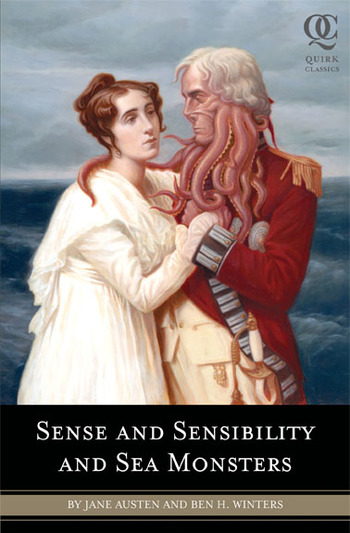 Spiritual Successor to Pride and Prejudice and Zombies, which takes the text of Jane Austen's original novel and filters it heavily through the Cosmic Horror worldview of H. P. Lovecraft.
Advertisement:

The Dashwood sisters, Elinor and Marianne, live with their widowed mother and younger sister Margaret in Devonshire following the death of their father, who was mauled by a hammerhead shark. The seas have become dangerous ever since the mysterious and horrifying Alteration that has caused all the creatures of the ocean to become vicious and violently opposed to humans, and the sisters have had to train to defend themselves against attacks from the waters all their lives. Elinor has an on-again, off-again flirtation with the seemingly oblivious scholar Edward Ferrars, who is seeking to figure out what caused the Alteration to begin with, when the family is forced to move to a chain of islands owned by Sir John Middleton instead. There Marianne falls hard for the dashing explorer Willoughby, while simultaneously attracting the unwanted attentions of the older and dreadfully disfigured Colonel Brandon.