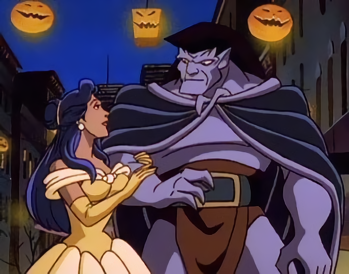 Love knows no genetics.
"As the years passed, he fell into despair and lost all hope. For who could ever learn to love a beast?"
— Beauty and the Beast
Advertisement:

The male is usually a monster physically, capable of great rage and destruction. The female is kind, smart, and emotional. She brings out the best in him. She sees the good in him and the world; he smashes anything that threatens her into itty-bitty pieces. This often leads to Love Redeems.

The "beast" is usually a male character, due to ruggedness and by proxy beastliness traditionally being considered masculine traits, but there may be exceptions.

The ideal is often so high that sexual relations are not mentioned (not by the creators, at least). If they happen or are mentioned, the results could be doom, risky, kinky or mysterious in how it works. By means of Functional Magic, Applied Phlebotinum, or a good old-fashioned True Love's Kiss, the issue could be avoided entirely by one of them permanently turning into the other's species. The relation may not even be romantic; all that matters is the contrast between the two characters.

A common variant is making the Beast intelligent and cynical in contrast to a Gentle Giant image. Storytellers may also occasionally invert the typical personality dynamic by having the "Beast" be polite and personable and the "Beauty" be violent and belligerent; it can emphasize how the Beast seeks to be seen as more normal and compensates accordingly, whereas the Beauty isn't held to the same standard and thus can act however she wants. A common way around the Beast's appearance is Blind and the Beast, though that one doesn't always involve romance.

See also Ugly Guy, Hot Wife and Sexy Dimorphism for cases of a beastly partner and a pretty partner, where the difference comes from real-life beauty standards and doesn't symbolize anything about the characters' personalities. See also Freakiness Shame. If the "beast" part is downplayed, it may be a case of Interspecies Romance. If they are only friends or work together with no romantic subtext, or that subtext being in the background, that's Monster and the Maiden. For the metaphorical variety, see Death and the Maiden. Also see Mars Needs Women.