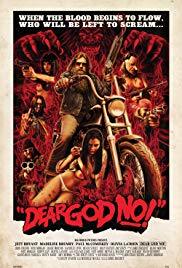 When the blood begins to flow.... who will be left to scream?
Advertisement:

Dear God No! is a 2011 American action Sci-Fi Horror film.

The Impalers are an outlaw biker gang on a rape and murder spree. The rest of their organization tries to stop them, so the gang slaughters the lot. On the run, the few survivors bust into a cabin to hide out and terrorize the family within. However, the family has secrets of their own, and something in the woods is stalking them all...

The film received a sequel, titled Frankenstein Created Bikers, in 2016.