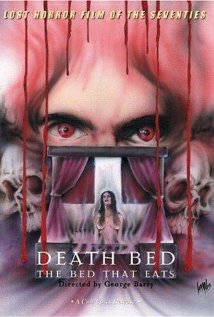 "Who would have thought that a movie that admittedly is about a killer bed is actually some kind of exploitation art film?"
—The Cinema Snob reviewing the movie

In 1972, some guy named George Barry got a camera and some film.

What happened was Death Bed: The Bed That Eats.

An incredibly cheesy and bizarre mix of horror, sexploitation, and arthouse, Death Bed was shot in 1972 but a print wasn't struck until 1977. It then disappeared, before being rediscovered in 2003 and released on DVD. It gained a cult following when bootlegs made from a rare UK VHS/Betamax copy of the film began circulating. Director George Barry reportedly forgot about the film before he came across said bootleg found on a horror movie forum.

Death Bed: The Bed That Eats contains examples of: