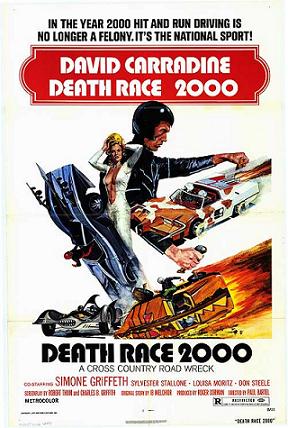 Death Race 2000 is a 1975 action movie directed by Paul Bartel, produced by the king of B-movies himself, Roger Corman. It's based off the short story The Racer by Ib Melchior.

In a dystopian society in the "near future" of the year 2000, humanity is distracted from their problems by a Blood Sport called the Death Race. More of a demolition derby with Audience Participation than an actual race, drivers traverse city streets engaged in Vehicular Combat while they try to run down as many civilians as they can. Each person they kill gives them points, and the more helpless the victim, the higher the point value. The surviving racer with the highest score wins.

Although Roger Ebert gave this movie zero stars when he reviewed it, the campy style, over-the-top mayhem and fantastic actors (David Carradine and Sylvester Stallone for starters) have made this movie into one of the definitive examples of a Cult Classic.

It received a remake in 2008, which went for the Darker and Edgier option and set itself up as a semi-prequel, a Spiritual Successor with The Asylum's Mockbuster Death Racers, which retained the dark comedy, and then finally in 2017 an official Corman-produced sequel, Death Race 2050.

Examples within the film: