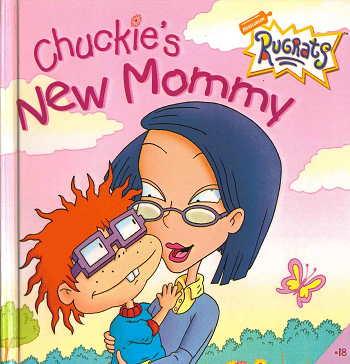 "You know, there's still a lot about you that I don't know yet. Like your favorite sandwiches, or your favorite games, or the songs or stories you like. You know those things may take awhile. But I do know that I love you very much. I hope that'll do til' I get the other things sorted out."
— Kira Finster, Rugrats
Advertisement:

The trope that stepmothers are prone to loathe and mistreat their stepchildren can be found in fairy tales and folklore all over the world. So common are Wicked Stepmothers that inverting that trope will make things interesting.

Cue the Good Stepmother, a woman who ends up making the life of her stepchildren better. Far from plotting to get her stepchildren out of the way to secure the family fortune for herself, she instead acts as a mentor or protector to her stepchildren and shows genuine affection for them. Plots usually feature Good Stepmothers as supporting characters who help their fosterlings (the protagonists) succeed in life and "make their fortune".

To fill this role, the Good Stepmother is exceptionally clever and resourceful. Often there is even something supernatural about her, making her somewhat similar to a Fairy Godmother. This tale type also likes to take elements of the well-known Wicked Stepmother stereotype and turn it on its head—for example, the Good Stepmother is quite frequently an actual witch, but one who uses her powers for the benefit of her stepchildren.

The stepchildren do not have to be actual children. More typically, they are teenagers or young adults. Because of that, the Good Stepmother is not always a Parental Substitute. If the stepmother has children of her own, they will get along well with the children of the first wife, and may form a Sibling Team. Good Stepmothers are also the norm in dom coms which feature a blended family. Often, there will be an episode dealing with how the stepchildren fear their stepmother or expect her to be wicked, and are then proven wrong.

It wouldn't be rare for the Good Stepmother to want to secure a portion of the fortune for herself. In such a case, the fortune might actually be better maintained, and she'll spend her share wisely, not necessarily perfectly.

May overlap with Happily Adopted, which involves an adoptive family, not just a stepmother. May be invoked by the parent deciding to Marry the Nanny or some other person who already has a good relationship with the child. Often Truth in Television. Sounds like but has nothing to do with My Real Daddy.