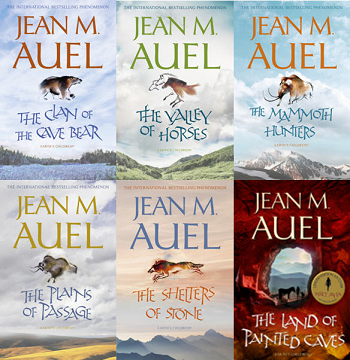 A series of novels by Jean M. Auel that don't really fit into any one category. The basic idea is a portrayal of life during the Ice Age, but this includes elements of Romance Novel, Historical Fiction, Historical Fantasy, travelogue and Shown Their Work mixed with a lot of Artistic License.

The novels revolve around "Ayla," a Cro-Magnon woman who lived about 30,000 years ago, somewhere near the Black Sea (modern-day Ukraine). Orphaned at five due to an earthquake, she is taken in by a group of Neanderthals. Auel goes into great detail on the physiology of these Neanderthals, who call themselves the Clan of the Cave Bear after their primary deity. The main difference between Clan and "Others" (Cro-Magnons) is that Clan have access to Genetic Memory, which makes them quick studies for anything their species already knows but very slow to accept innovation or change. Ayla is adopted by the clan's medicine woman, and her brother, a crippled shaman, learning a great deal of herb lore and practical medicine, but also learns to hunt in direct defiance of the Clan's traditions. Her clan's leader (the brother of the medicine woman and shaman both) accepts her as best he can, able to recognize her talents and skills even if they make him uncomfortable, but when his snotty son takes up the mantle of leadership, the son has Ayla exiled from the Clan. This would be easier on 14-year-old Ayla if she hadn't borne a son, Durc, a Homo neanderthalensis x sapiens hybrid that must be left behind.

From this point on, Ayla strikes out on her own, seeking her own kind. The story then begins to alternate between her point of view and that of her designated love interest, Jondalar, a Cro-Magnon from what is today France, as he journeys down the length of the "Great Mother River

" with his brother Thonolan. Thonolan is killed during the adventure, and Jondalar wounded, but Ayla saves him, and the two fall in love. After spending a year with a Ukrainian tribe and entering a Love Triangle, they then begin to journey back up the Danube, arriving back at Jondalar's homeland just in time for the fifth book to start.

The novels in the series:

Auel is considered something of an expert on Ice-Age culture, due to the sheer amount of research (and hands-on experience) she has with the practices at hand, such as leather-tanning, flint-knapping and cave paintings. She has attempted to weave into the story as much archaeology from the period as possible, often depicting the creation of known prehistoric artifacts. Recurring themes include the differences between Neanderthal and Cro-Magnon intelligence, sapience and physiology, and the racial tensions resulting thereof, as well as Ayla's upbringing in the Clan and the prejudice she is subjected to for that reason.

The first book, The Clan of the Cave Bear, was adapted into a film in 1986 of the same name starring Daryl Hannah as Ayla. Lifetime also ordered a TV pilot based on the books in 2015. Since then however it appears to be stuck in Development Hell or canceled.

And yes, this is where that other Ayla got her name from.