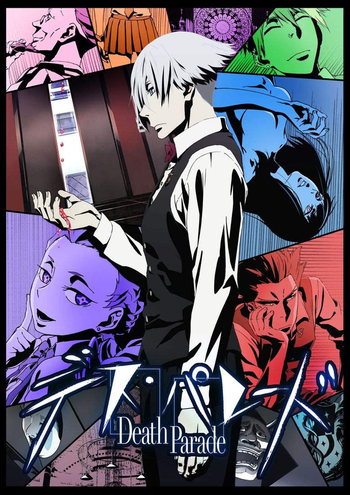 "I am now about to explain to you what your circumstances are. I ask that you pay close attention. One: First of all, I cannot answer the question of where you are. Two: We will now have you play a game. Three: We will have you choose the game by roulette. Four: We will have you stake your lives on the game."
"Life is a mysterious thing. Each and every life spins its own, totally separate tale, yet they become intricately entwined in each other. And no one knows how they will end up."
Advertisement:
"That's true. You never know until you die. You may not even know after you die. But you know what? That's what makes it interesting, right?"

Two people walk into a bar with no recollection of how they arrived there. Greeted by a mysterious white haired man who calls himself Decim, they are told very little of their current situation, only that they must play a game in which they will stake their lives. With no way to escape, they have little choice but to comply with the man's strange demands.

As they play the game, the two soon start to recall the circumstances that brought them to the bar, and their true colors begin to shine in a game that pits the two souls against one another.

Produced by Madhouse, Death Parade expands off of a half-hour short called "Death Billiards", an entry for Japan's Anime Mirai: Young Animator Training Program in 2013. The short was successful enough to be one of only two that were produced into an anime series. Aired during the Winter 2015 Anime Season, it can be legally streamed on Funimation's site

Now has a character page in the works.