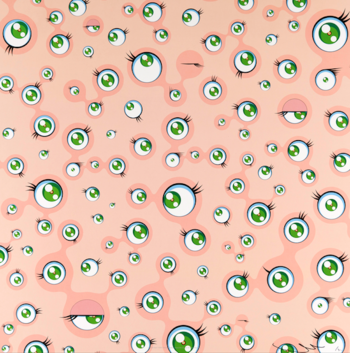 Jellyfish Eyes by Takashi Murakami
"A thousand eyes
Open inside
To grant me sight to see the end
The more I behold
The further I fold
Into the madness I descend"
— Miracle of Sound, "A Thousand Eyes"
Advertisement:

The eyes are the window to the soul, or so we're often told. It's probably not surprising, then, that eyes are one of the most common Body Motifs. When eyes turn up in a symbolic role, they are normally linked to themes of perception, vigilance, and, occasionally, psychic powers. On a more ominous level, eyes can be linked to deception, illusion, secret societies holding forbidden eye-opening knowledge, and/or being under constant surveillance. They are also linked to appearances — both the superficial and the ability to see something's true nature.

As with all motifs, the motif can take the form of an actual eye, or simply a symbol of one: for example, a tattoo, a piece of jewellery or other MacGuffin, or a sign on a wall. It's also worth remembering that eyes are extremely vulnerable, so the motif might be the absence of an eye. In such circumstances, the theme may become blindness (both literal and metaphorical) and compromised perception.

Compare Third Eye, where an extra eye gives supernatural powers due to symbolism (and thus, motif) regarding the eyes.