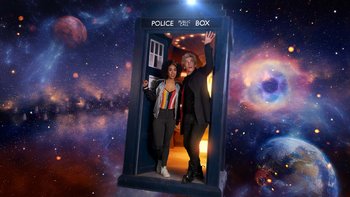 The learner and the legend.
Click here to see the Radio Times magazine poster for this episode: 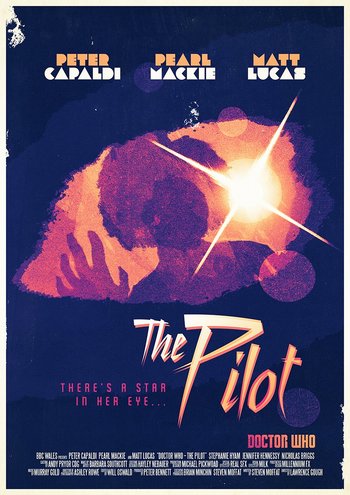 Bill: Promise you won't go?
Heather: Promise.
"Time! Time doesn't pass. The passage of time is an illusion, and life is the magician. Because life only lets you see one day at a time. You remember being alive yesterday, you hope you're going to be alive tomorrow, so it feels like you're travelling from one to the other. But nobody's moving anywhere. Movies don't really move. They're just pictures, lots and lots of pictures. All of them still, none of them moving. Just frozen moments. But if you experience those pictures one after the other, then everything comes alive. Imagine if time all happened at once. Every moment of your life laid out around you like a city. Streets full of buildings made of days. The day you were born, the day you die. The day you fall in love, the day that love ends. A whole city built from triumph and heartbreak and boredom and laughter and cutting your toenails. It's the best place you will ever be. Time is a structure relative to ourselves. Time is the space made by our lives where we stand together, forever. Time And Relative Dimension In Space. It means life."
— The Doctor
Advertisement:

The one with the starry-eyed lass.

The Series 10 premiere of Doctor Who is also the proper debut story for new companion Bill Potts. Written by Steven Moffat.

The Doctor has settled down as a university professor with Nardole as his ever-bickering assistant, watching over a mysterious vault (no, he's not in it this time). Bill Potts is a bright twentysomething lass who has a job serving chips on campus. Circumstances have led her to sitting in on his lectures, fascinated by his thoughts on time and space, and he, in turn, shows curiosity towards her peculiar behaviour — how she isn't upset by what she doesn't understand, but fascinated and excited about it. He decides to become her tutor, free of charge provided she lives up to his strict academic standards. But even so, the newly-minted student has no idea of just how curious he really is.

Bill finds herself gradually sucked into the Doctor's strange life, and the Doctor finds it hard to resist stepping back into his days of TARDIS travels. Some months after their teacher-student relationship begins, trouble brews when Bill meets a troubled girl — Heather, a woman with a distinctive star-shaped flaw in her left eye — while seeking affection from a special someone. It's Bill and Heather who end up growing closer together, but the latter becomes a little too drawn to an alien puddle and gets assimilated for her trouble, transformed into an aqueous aberration stalking Bill at every turn. The Doctor must intervene before Bill becomes a victim, even if that means giving her the skinny on his secretive lifestyle.

If you were looking for the actual pilot episode of Doctor Who, you'll find it here.

Bill: What changed your mind?
The Doctor: Time.
Bill: Time?
The Doctor: And Relative Dimension In Space. It means, what the hell?