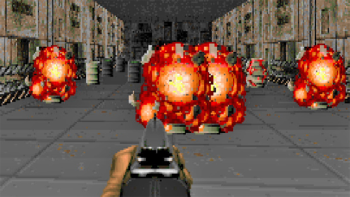 Sing boom-tarara, ring out a song of good cheer.
"Snipers on ledges wearin' bulletproof apparel.
Why are these idiots standing next to those flammable barrels?
Red containers of death they make for easy kills.
They must spend a fortune on the fuel bill!"
—Miracle of Sound, Shooter Guy

In some action games and many first-person shooters, explosive barrels or crates are present. Generally red and marked with some sort of warning, they will explode when shot and kill any nearby enemies. They are sometimes located conveniently near a horde of enemies. Sadly, your own AI comrades may decide to take cover behind the barrels too, if they're as dumb as the enemies.

In platform games, the nature of exploding barrels usually varies somewhat. Instead of being a means to take out a large group of enemies, they usually pose a hazard to the player that should be avoided.

Exploding Barrels is a sister trope to Crate Expectations and these tropes sometimes combine to form Exploding Crates.

This is a well-worn trope, but with no signs of going away; sure, the presence of these barrels may be inexplicable at best, but Rule of Fun is king, and players will never get tired of having convenient sources of Stuff Blowing Up lying around.

In Real Life, storing explosives requires special permits, separation of batches and so forth to prevent "Pepcon"

type explosions. Video game environments are not required to comply with such regulations. Furthermore, usually one would actually have to go out of their way to make a barrel's contents so volatile as to explode from getting shot. But even on the rare occasion where you've got a material on your hands that's already that volatile to begin with, 1) it'd be stored far more securely than in random barrels strewn haphazardly (emphasis on hazard) out in the open, and 2) nobody with a gun would be allowed to get anywhere near it to begin with.

See also Every Car Is a Pinto: cars often play a parallel role to barrel as a source of Stuff Blowing Up — with similar burn-then-explode dynamics. Particularly in games where barrels would look really out of place. This too can be combined if the game has the proper scale into exploding fuel trucks.