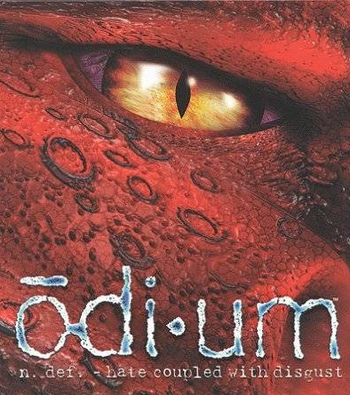 Yes, the game's cover supplies a dictionary definition of its own title.
Odium (also known as Gorky 17) is a tactical strategy game with some minor adventure and Survival Horror elements, developed by Polish studio Metropolis Software and released in 1999.
Advertisement:

Gorky 17 was a secret Russian town where enigmatic experiments were taking place until the town was carpet bombed to the ground. Now it is one year later, in the unimaginably distant 2009, when mysterious things start happening in a town somewhere in Poland. The first expedition sent out disappears. Three men are sent in the second expedition - Cole Sullivan, Jarek Ovitz and Thiery Trantigne. Their mission: to find out what happened. And boldly go where no man has gone before survive.

Two sequels, Gorky Zero: Beyond Honor and Gorky 2: Aurora Watching were released in the Eastern European market. The sequels share a common plot, but are fairly unrelated to the original Gorky 17, being Metal Gear-style third person stealth shooters focusing on the activities of covert ops specialist Cole Sullivan as he investigates zombie-producing shenanigans being carried out by a rogue scientist and a renegade colonel. Gorky 2 was released as Soldier Elite for the English-language market, but Cole's name was changed to White Fox.

Now available on GOG and Steam.