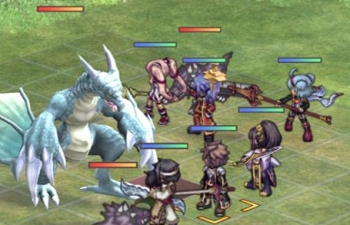 It's your brave, 2-D sprite heroes against this fully textured, 3-D dragon!
Advertisement:

While some games can be nothing but sprite graphics or Polygonal Graphics, some games mix them up.

This is usually for technical reasons (as the difference between polygons and sprites is usually obvious). Polygon graphics had been around for years, but it wasn't until the 90s that extensive polygon graphics would be practical and affordable for mass market games. Even in those days, polygon counts, texture resolution, shading, mapping, etc. were very limited at the time, at least for systems people could actually afford.

It was possible to make everything out of polygons (save for things like the HUD), but only with certain types of games, and they still had to make some sacrifices (like an extremely limited color depth in the textures). This trope is about games that relied on a combination of sprites and polygon models to get the most details in one scene. (Combining sprites and polygons was made practical by the technical fact that most video game systems since the PlayStation use the same video processing chip to render both, and usually make no distinction between 2D sprites and flat polygonal objects that are always positioned to face forward.)

There are two forms of this: building the background areas as 3D scenes, with heavily scaling and rotating sprites as characters/objects (a technique called "billboarding"). Alternatively, games would use full-screen bitmaps as the backgrounds, with characters and objects built as polygon models in the foreground.

Billboarding faced a problem. Since the environment itself is 3D, the environment could theoretically be viewed from any angle. But sprites are generally designed to only look reasonable from a particular direction. Games used a variety of tools to work around this limitation.

One tool was to restrict the camera to pan, tilt, and zoom, without rotation. Thus, the camera could slide sideways and up/down, but never change the angle of view for sprites.

Another tool was to only use this for sprites that would look "correct" when viewed from any angle. The only such object for which this would even remotely be true would be perfect spheres. Even sphere-like objects can show problems, since any lighting effects applied to the sprite would not properly shift as the camera moves around. Even so, this worked well enough for games of the era, like the rolling spheres in Super Mario 64.

Other games developed a plethora of sprites, all drawn (or pre-rendered) from different viewing angles. The game simply selects which sprite to draw based on which direction it is being viewed from.

Another solution to create a pseudo-3D sprite object with a high level of detail is to use two sprites, arranged at right angles. This looks moderately okay from every angle, but not very good from any; this is particularly true if it can be viewed from above, where it will look like a letter x made of single-pixel lines. This is sometimes still used for grass and other insubstantial-yet-complex plant life that will need to be repeated extensively, especially if it needs to be semi-transparent.

And sometimes, games would just accept the limitations of their day, having an obviously non-spherical object constantly facing the camera.

Systems from the Sega Dreamcast onward (with the exception of the DS, which is more or less equivalent to the 5th generation) have largely dropped this, due to the huge polygon counts allowing full 3-D models of even the smallest objects, and have the texture resolution to show the detail of those objects. Some extremely complex effects such as smoke, explosions and fire are normally still rendered as two-dimensional objects; this is hardly surprising, as even big-budget CGI movies tend to use practical effects rather than attempt to simulate these. This trope does continue in spirit in even the latest games, with 2D effects being used in place of more complex geometry; bump and normal mapping both operate by using a 2D image to add detail to a 3D object without using additional polygons.

It should be noted that the horizon and the sky in even recent games are usually pre-rendered and then drawn onto the interior of a cylinder, sphere, or hemisphere, since it would be an unnecessary waste of processing power to create such distant objects as level geometry. Effects such as snow and rain are usually also achieved this way, by creating a series of concentric cylinders with an animated rain effect mapped to them, which are centered on the player's position.