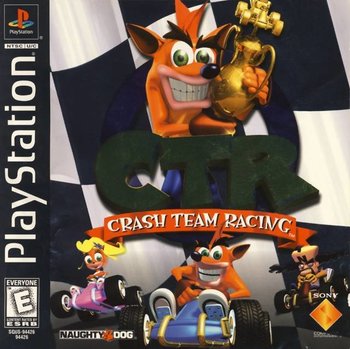 The first spin-off of the Crash Bandicoot series, as well as the last game of the series developed by Naughty Dog. A Mascot Racer heavily inspired by Mario Kart, and also drawing several elements from Diddy Kong Racing, CTR is often considered to be the best kart racing game on the original Sony PlayStation, if not the entire fifth generation of consoles, though its soundtrack typically isn't viewed with as much praise.

An intergalactic visitor called Nitros Oxide arrives on Earth to challenge the world's fastest racers in a grand prix. Eight characters — each one with unique abilities and under the command of either Aku Aku or Uka Uka — will participate in races and win enough trophies to challenge him or else Oxide will turn the entire planet into a large concrete parking lot and enslave all its inhabitants. Also, there are other characters who want to defeat Oxide on their own and will not tolerate any disturbances in their way.

The game has a Diddy Kong Racing styled 1-player adventure mode; most levels have one of each of these items to get:

Followed by two indirect sequels in the sixth generation of consoles, 2003's Crash Nitro Kart and 2005's Crash Tag Team Racing, though these were made by different developers and recieved a mixed/mildly positive reception. Naughty Dog made their own Darker and Edgier Spiritual Successor in 2005: Jak X: Combat Racing, a well-received spin-off of the Jak and Daxter series.