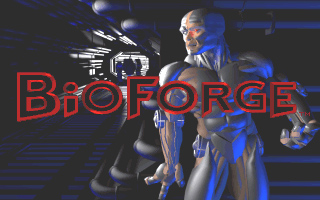 "Return the fork, or I'll command it to destroy you!"
Advertisement:

A 1995 Action-Adventure game by Origin Systems for DOS and Windows PCs.

He wakes up in a cell. He doesn't know who he is. He doesn't remember where he is. He is within the depths of an abandoned sprawling base on a lonely moon; apparently, he is the victim of an insane radical group's cruel experiments, which have turned him into a cyborg — a grotesque killing machine.

It is up to him to escape the base, discover the secret of his true identity and the moon, and hopefully get revenge on the Mad Scientist responsible for his ordeal, Dr. Mastaba.

The game was technologically innovative for its usage of fully-textured 3D models (imagine the first Alone in the Dark (1992), only with PlayStation quality models), but didn't have great sales, owing perhaps to its very high system requirements and it being advertised as an "Interactive Movie" (while having little do to with them) just as that genre was losing its popularity.

Not to be confused with Geneforge.

A Let's Play of the game is available.