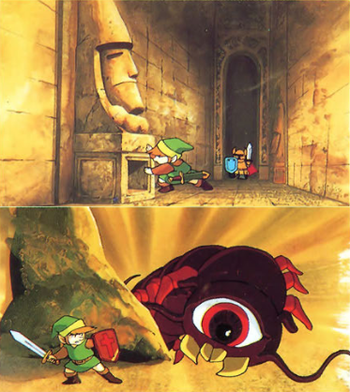 A subgenre of both the Action Game and Adventure Game genres, the Action-Adventure game was effectively created by such titles as The Legend of Zelda and Metroid back in the days of the 8-bit Nintendo Entertainment System. These two titles are recognised as archetypical of the genre, and since then, the Action Adventure has expanded to include games in a wide variety of thematic genres, since the jump to 3D, as well as appearing on every video game platform around.

The essential traits of an action adventure are considered to include reflex-based gameplay, an action game element, combined with item collecting, environment exploration and puzzle solving, which are associated with the adventure game genre. Despite this, or perhaps because of it, the Action Adventure is sometimes used as a catch all for games that do not overtly suit any one genre but still have a plot, a usage which some consider erroneous.

The action adventure is exemplified in games that have large and detailed worlds to explore, a range of options in terms of possible actions and some level of non-linearity in terms of plot, but this last aspect is often sacrificed, in whole or in part, on the altar of budgets and/or writers. This lack of large-scale non-linearity is what differentiates the Action-Adventure game from a Wide-Open Sandbox, though there are other minor, but important, differences. This level of non-linearity is a characteristic the action adventure shares with the RPG, though it usually doesn't have experience points or levels — character improvments, if any, are only ever the result of gaining new items or upgrading old ones. The key here is that in an action adventure a character either has an ability or they don't; there is no measure of how good they are with a given ability (which is considered an RPG element).

As a rule of thumb, an Action-Adventure game is distinguished from those of closely related genres, such as Platformers, Action Games and Adventure Games by its combination of but lack of commitment to any one of these genres. It contains reflex gameplay, which adventure games do not; puzzle solving, which straight-up action games do not; and jumping puzzles, which both adventure games and action games generally do not. Action-Adventure games also seldom, if ever, have "Extra Lives" (though there may be items that stop you from dying, such as the fairies in The Legend of Zelda), with the distinction between "fairies" and extra lives being that one has an "in-game" explanation and one is completely arbitrary. As indicated by the above description, the genre is a very broad one and hard to nail: Ben Croshaw once observed that the term in some ways has become a blanket label for any game that's hard to classify.

As the plot of these games becomes less and less Excuse Plot and more and more developed, this genre has become increasingly similar to the Role-Playing Game genre. A general rule of thumb for telling them apart: RPGs place a much greater focus on character stats and the mechanics of battle, whereas in Action-Adventure games the combat usually boils down to "Hit the bad guys until they die".

Most Licensed Games not on a portable console have this type of gameplay.

See Metroidvania for a particular sub-genre.

The basic story follows the half shadow, half light being called Umbra through the destroyed world of Penumbra, defeating corrupted gods to reach the Queen of Darkness.

The basic story follows the half shadow, half light being called Umbra through the destroyed world of Penumbra, defeating corrupted gods to reach the Queen of Darkness.