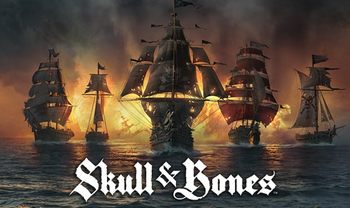 Skull & Bones is an upcoming tactical 3rd person action video game developed by Ubisoft. Players take control of a customizable pirate captain and take them on a single player campaign and multiplayer-based world set in the Indian ocean during the The Golden Age of Piracy.
Advertisement:

It is the Golden Age of Piracy. Renegade captains command the most powerful weapons on Earth: warships. In Skull & Bones, you are an insatiable, upstart pirate captain who has refused the king’s pardon. Having nothing to lose, you sailed from the Caribbean to the Indian Ocean, an exotic and untamed frontier full of lavish riches.

However, these rich and idyllic waters are also a battleground where far-reaching colonial empires, powerful trading corporations, and ruthless pirate gangs are fiercely competing for their share of these valuable treasures.

During your journey to become the ultimate pirate kingpin, you will build a fleet of ships you can customize, prey upon lucrative trade routes, and take down rival pirate captains, memorable characters, or other players. In order to survive in this ruthless ocean, you will have to ally with other pirate captains to form the most influential pirate gang, becoming too big to fail and joining the endless struggle for supremacy of the Indian Ocean.

The game is inspired by the success of the naval combat system in Assassin's Creed IV: Black Flag.