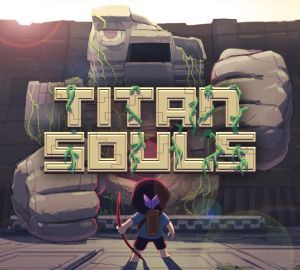 Titan Souls is an Action-Adventure Boss Game, developed by Acid Nerve, published by Devolver Digital, and released on April 14th, 2015 for PC, PlayStation 4 and PlayStation Vita. Its gameplay is a mixture of The Legend of Zelda and Shadow of the Colossus. The player controls a lone adventurer armed with a bow and a single arrow that has to be retrieved after every shot. The goal of the game is to kill 19 Titans who require only one hit to kill; however, finding their weak spot is extremely hard.
Advertisement:

The game uses a pixel art style with 3D elements for some of the titans. It plays as a top-down action-adventure with very simple controls: there is one button to shoot (or pull the arrow back to the player after shooting) and another button for rolling/running.