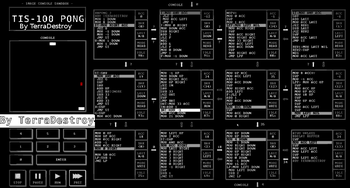 You get the idea. You can even run

Pong on it!
Described by the creator himself as "the assembly language Programming Game you never asked for", TIS-100 is a Zachtronics game about programming a fictional, bizarre computer in a minimalistic assembly language. It was released on PC on 20th July, 2015, and was then ported to iOS as TIS-100P on January 8th, 2016.
Advertisement:

Your Uncle Randy, an avid computer collector, has passed away. Your Aunt Doris sends you the computer he was working on when he died, telling you that he would have liked someone to finish the job he started. Digging into the machine's internals, you start finding notes left behind by an increasingly unhinged Randy...

Who built this strange machine? And for what?