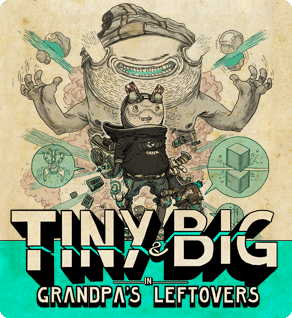 Tiny and Big: Grandpa's Leftovers is a Puzzle Platformer made by Black Pants Game Studio. It's the best underpants-based, physics-powered slice-and-jump game you'll ever play!

Our protagonist is Tiny, an inventor hunting for his rival Big, who has committed the most fiendish crime… of stealing his disappeared grandfather's underwear. (Needless to say, the game is a little odd.)

But as Tiny chases the fiend into the desert with the aid of his A.I. companion, The Radio, as well as his arsenal of gadgetry, he finds there is far more to his grandfather, the Pants, and his rivalry with Big than what meets the eye…

The game's labeled as a "Slice and Jump Platformer", with the three main tools at your disposal being a laser to cut objects, a rope to pull objects around, and a rocket to shove things out of the way, allowing you to do what you please to the environment. It was initially announced as being the first of an episodic series, though since its 2012 release the studio hasn't made plans for any sequels. Yet.

Tiny and Big provides examples of: