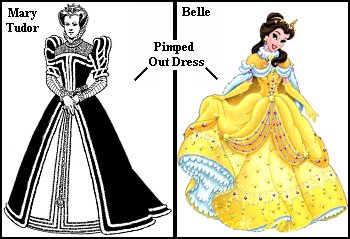 Pretty dresses have been worn by both real life royaltynote Mary I and Disney Princesses.note Belle from Beauty and the Beast
"The parrot's talking?! Oh wait, parrots can talk..."
— Kirara Amanogawa reacting to Aroma, Go! Princess Pretty Cure
Advertisement:

Once in a while, a TV show does something that actually happens in Real Life. Don't worry, it never lasts, and they soon slip back into their old habits. Rarely, other shows pick up on this, and you then get a recurring trope that accurately reflects the real world. Listed below, for your convenience, are some examples of those. The Dark Side of this trope (and too often the only side) occurs in Ripped from the Headlines.

When it's the exact opposite, you've got a bad case of Reality Is Unrealistic. If people fall for it, it's because TV Never Lies or, in the case of media conventions that audiences come to take for granted, The Coconut Effect.

Since they are technically truth, these tropes do not need to be Justified. However, Viewers Are Morons, and so writers may actually throw in justifications.

The Bastard Spawn of these two tropes gives us Inspired by… and Very Loosely Based on a True Story.

There's a Sliding Scale of Truth in Television frequency. In one end, the amount of times the said trope is Truth in Television (based on well-known cases) can be counted with fingers of one hand (for example, Air-Vent Passageway). On the other end of the scale, these tropes happen very frequently in Real Life (like Berserk Button).

Another way of saying the above is that a great many things happen on television that have happened at least once to someone in the world. The reason they become tropes — and remember the principle of Tropes Are Tools here — is because they're used in TV (et al) a lot, and generally in ways that wouldn't mesh well in Real Life. So, for instance, it's certainly the case that special agents have worn Lycra (or similar) bodysuits, that people have squeezed themselves through air ducts, and that some people are cripplingly afraid of small spaces. This does not make the protagonist with a Spy Catsuit, making an Air-Vent Passageway escape but hampered by her Fatal Flaw of claustrophobia an example of Truth in Television. To extend this even further, if we only ever saw those tropes being used together or in similarly improbable combinations, none of them would qualify as Truth because they wouldn't have ever been used in a way that was, well, Truthful. They've been hyperbolized, exaggerated and stretched to be much more exciting and dramatic than Real Life, and in doing so hardly resemble it any more at all. Which is why they're Tropes.

Also, because something may be Truth in Television does not mean we necessarily want Real Life examples of it. If a trope is listed both here and on No Real Life Examples, Please!, that means that while its occurrence is definitely possible or even common in Real Life, listing the examples would either be too exhaustive, pointless because in real life it is just a meaningless event with no relevance, too controversial because Real Life is subjective, or too NSFW because it is a sex trope and while true, descriptions would be too upsetting, not Family-Friendly, or too gossipy.

A good example would be pretty much any trope related to religion or its practice: for example, the Apocalypse Cult and Scam Religion are both unfortunately Truth in Television, yet it's often subjective (e.g. people thinking all religions are scams, or all religions but their own are), and even in the cases where it's objectively proven (e.g. the group committed mass suicide with notes about an apocalypse, or arrests/litigation uncovered objective fraud) leveling the accusation is highly insulting.

And that's pretty much how television works. So please, before adding anything to the list below or describing any existing tropes as Truth in Television, think for a moment: is or was this used in TV kinda like it really happened? Or is there maybe kind of a lot of hyperbole on one side or the other of the equation to make it fit? If the answer to the first question is a definite yes... Go right ahead.

Compare Tropes Examined by the MythBusters and Shown Their Work, some of which proves that they're Truth in Television. Contrast Life Imitates Art.

Frank may be insane, but this is one of the most realistic things he ever said.

Frank may be insane, but this is one of the most realistic things he ever said.