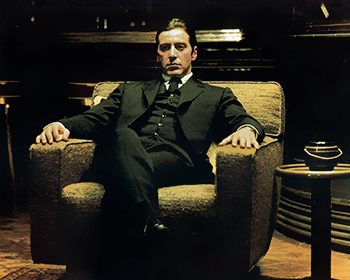 Tropes: Chiaroscuro, Slouch of Villainy, Sharp-Dressed Man, Dark Is Evil, Damn, It Feels Good to Be a Gangster!
Not a trope: Sitting on a chair
"While this has no plot bearing, Nanoha from Lyrical Nanoha is left-handed."
— Example from the now-deleted page "Everyone Is Righthanded"

Tropes are conventions used in storytelling to convey some sort of information to the audience. But when a character does something as trivial as sit on a chair, that's just something that happens normally or incidentally during the storytelling. Sitting in a chair isn't meant to convey meaning — it's not a storytelling convention. In short, it's Not a Trope.

Unfortunately, here at TV Tropes, we occasionally get suggestions in the Trope Launch Pad to add a trope along these lines, and we have to tell the suggesting troper "no, you can't add that". This page is a handy and evocative way to do that; it's saying that the proposed trope is no better than pointing out that occasionally, people sit on chairs. So if someone is calling your idea a "chair"/"chairs" or "PSOC", this is what they mean. They're saying that your idea is, once again, not a trope.

Note that the criticism here isn't simply that the idea is "too common" or "too broad" to be a trope. No Trope Is Too Common; there are some extremely common cliches and Omnipresent Tropes that appear very often in fiction — maybe as often as chairs — but these are still storytelling devices. For instance, there is The Couch, which is something characters sit on, but it has a purpose that correlates with the visual layout of house floor plans on TV. Conversely, an idea can still be "sitting in a chair" even if it rarely happens at all; for example, there may be only three works of fiction in which a person walks down a street called Jameson Street, but unless that name has some relevance to the storytelling beyond just being a street name, it's still a "chair"; there's no meaningful pattern or connection between these works, and the name of the street itself conveys nothing about the work.

One good sign of an idea being a "chair" is if you can't think of any examples that have meaningful content. We've seen this most acutely with Personal Appearance Tropes, which are still undergoing an extensive cleanup; the link between any two characters who look the same may be just coincidence, without any clear or consistent meaning or purpose. It's not actually that hard to come up with a meaningful pattern; it doesn't even have to be a plot element, as it can just be Narrative Filigree or Garnishing the Story.

Indeed, people sitting in chairs can be a trope if there's that added element of a meaningful connection or pattern to recognize. For instance, the chair may be impossibly awesome, which gives you an idea of who might be sitting in it. Or the chair might be a more functional Super Wheelchair. Or the first time we encounter the character, their back may be to the audience until they swivel around in their chair. Or they may be sitting in a chair that's claimed by someone else. Or the Big Bad might be slouching in the chair and showing off their badness. Or the chair might be conspicuous by its emptiness. These are all real tropes involving a chair and somebody sitting (or not sitting) in it. But what makes them tropes is that there's something meaningful to the characters in the story using the chair in such a way.

The best way to illustrate how "sitting in a chair" is not a trope is to show the situation in which it could be a trope. This whole time, we've been assuming that all humans sit on chairs, when this is not necessarily the case; one of the basic anthropological divides of Real Life is between people who sit at ground level (e.g. on a carpet, tatami, cushion, or the ground itself) and people who sit above ground level (i.e. in a chair). If a character in the ground-sitter class doesn't grok chairs — they don't understand what a chair is for, or they use it incorrectly or awkwardly — that may be a trope along the lines of "Doesn't Grok Chairs". But you'd have to show (a) the failure to grok chairs carries some meaning within the story; (b) this happens often enough in different works for it to be a recognizable pattern; and (c) it's a meaningful deviation from the ordinarily expected behavior, which is why we notice it. Since everyone is expected to grok chairs, it's only meaningful when they don't.

If you're on the Trope Launch Pad and you're still not sure whether or not your idea amounts to People Sitting on Chairs, try asking, "Is This Tropable?"

See also Consistency (for the other aspect of defining a trope) and Square Peg, Round Trope (when something is not an example of an otherwise real trope). Do not confuse with Seated Tropes (a list of legitimate tropes that just happen to involve sitting) or Averted Trope (there is an actual trope; it just doesn't show up in a particular work).

No examples here, please. They're not necessary.note Psst!