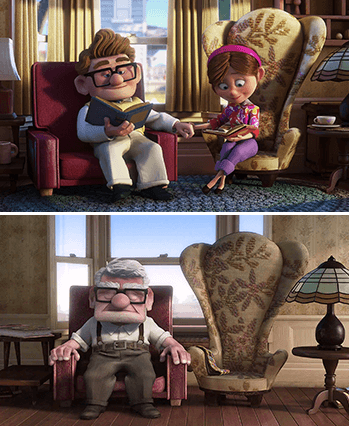 "We shall meet, but we shall miss him;
There will be one vacant chair;
We shall linger to caress him
When we breathe our evening prayer."
— "The Vacant Chair"
Advertisement:

Say you have a longtime member of a group, who always sat at a particular chair when the group was doing its thing. Now say that member dies bravely in battle, or is otherwise prevented from returning to the group. The group then honors his memory by making sure the chair he sat in for so long remains empty. Usually, this is revealed to the Naïve Newcomer or someone who doesn't yet know the history behind the chair and goes to sit down in it, unintentionally pressing the group's Berserk Button.

Compare This Is My Chair, Empty Bedroom Grieving and Missing Man Formation. Sub-trope of Shrine to the Fallen as the chair can serve as one.

As this can be a Death Trope, unmarked spoilers lie ahead. Beware.

Not long after learning that Glimmer's father, King Micah, was one of the Horde's first casualties, Adora sits in his chair by accident.

Not long after learning that Glimmer's father, King Micah, was one of the Horde's first casualties, Adora sits in his chair by accident.