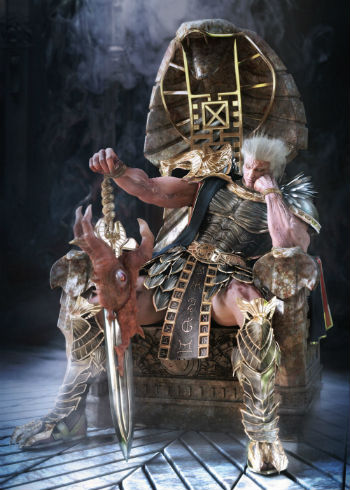 Comes with Bad Posture of Evil!
"No other being dares to sit on couches like Darkseid does!"
— Linkara (during his review of Countdown to Final Crisis), Atop the Fourth Wall
Advertisement:

Being a villain has its perks. In fact, it's too cool for good posture. This sort of villain will forego the egg-chairs and thrones in favor of more comfortable and casual lounge chairs, draping themselves over them in a Slouch of Villainy. If it's The Starscream doing it, expect them to slouch in their former boss's throne as a way of posthumously insulting them.

This is usually done to show how blasé and badass a character is; they're so bored and nonchalant that they aren't bothering with conventional posture and look cool in the process. This has the down side of making them less able to react if someone attacks, but that's not a problem if they have the right abilities. Don't provoke them. There's a fine line between a slouching badass and a bored tyrant.

Villains are inordinately fond of doing this in chairs that aren't theirs as well. Villains will surprise you by draping themselves on The Hero's chair, with an ambush, an Enemy Mine offer or An Offer You Can't Refuse, or to prove how badass they are prior to joining up more permanently. If there's an armrest on the chair, especially if it's a royal throne, odds are good that the character will adopt the Sitting Lion Beast pose and rest one elbow on it, with the hand tucked neatly under his chin, while sporting either a self-satisfied smirk or a glance of disdain. As mentioned with The Starscream point, this is a subtle way of insulting the person whose seat it belongs to. It's extra cool if they're drinking A Glass of Chianti.

Subtrope to Characterizing Sitting Pose; also compare with Leaning on the Furniture and Thinker Pose. Related to Rebel Relaxation and is often a case of Orcus on His Throne. A neutral (non-villain) variant is Reclining Reigner. Contrast Kingpin in His Gym, when the villain prefers to do something a bit more active than lounge around on furniture. Do not confuse with People Sit on Chairs, which is Not a Trope.

The Origami King slouches on his throne as he awaits the group to confront him for the final battle.

The Origami King slouches on his throne as he awaits the group to confront him for the final battle.