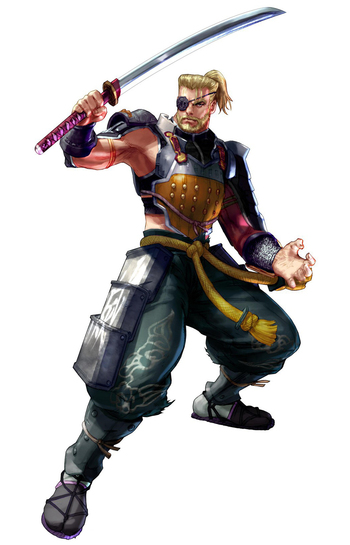 The Samurai are like the Japanese counterpart of Knights; proud, heavily trained warriors that dedicated themselves to a master (unless they're Rōnin), wield fancy steel swords, and generally keep the peace. The Western Samurai are samurai of non-Japanese heritage, black or white and even those of other Asian countries like Chinese and Korean, if they wield a katana or wear the armor (and are not Japanese), then they are worthy of the prestige and title of the Samurai.

Good examples of the Western Samurai follow the Bushido Code of Honour, focusing more on the philosophy that the Samurai follow while on occasion picking up the martial art skills and weapons. Bad examples usually focus more on the aesthetics of Japanese culture because they think it is cool, ignoring the code of ethics out of a form of vanity, greed or just plain ignorance, since for them Everything's Better with Samurai.

Compare and contrast McNinja, another Japanese warrior class (and rivals of the samurai) that also are made by non-Japanese people. Super-Trope to Samurai Cowboy (a cowboy that is mixed with samurai traits, being in weapons as well ideology) and Street Samurai (a samurai in a Cyberpunk/futuristic setting). Sub-Trope of Black Vikings. See also Everything's Better with Samurai, where the samurai thing it's only for the Rule of Cool than just being a real samurai.

For further info, The Other Wiki offers a section in the Samurai article