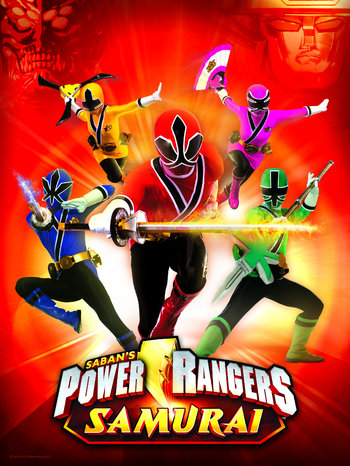 The 18th and 19th season of the Power Rangers franchise, using Ranger, Monster, and Zord footage from Samurai Sentai Shinkenger. It was the first season since Power Rangers Wild Force to be entirely directed and produced by Jonathon Tzachor.

In feudal Japan, Nighloks from the otherworldly Sanzu River emerged from cracks in the human world and terrorized the populace until a group of Samurai united to stop them. When the Nighloks begin appearing again in the present day, five young descendants of those samurai are gathered to train in the ways of their families' "Samurai Symbols of Power" and stop the Nighloks' efforts of using humans' tears of despair to make the Sanzu River flood the human world.

The first season produced by Haim Saban after taking the license back from Disney, it was that Saban was banking on nostalgia for the original Mighty Morphin' Power Rangers. They revived the classic theme song and referenced it in the morph call, and they got Paul Schrier to reprise his role as Bulk, half of the original series' Those Two Guys. The approach appeared to pay off where it counted, as Samurai did pull in solid ratings, unlike Jungle Fury and RPM, and easily got renewed.

Due to some oddities with how Nickelodeon handles episode orders, the show and future seasons are split into two and the second half of this series is branded as Power Rangers Super Samurai.