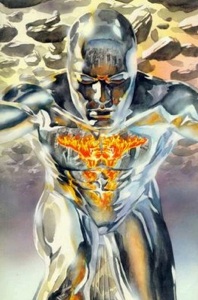 Comic Books and related media seem to love the idea of combining people with stuff Made of Shiny, hence the number of characters not just using Powered Armor but completely encased in a metal skin. It might be an organic metal skin, "liquid metal", or perhaps a super advanced Nanomachine suit of Powered Armor. Whatever the cause, the visual effect is of a transformed human with skin that is metallic, often silver, and polished to a mirror-like shine. If these figures go unclothed — and they usually do — Barbie Doll Anatomy will be in play.

These types generally have one of two power sets. They either are Nigh Invulnerable and have Super Strength, or are fairly high up in terms of power, usually being Reality Warpers or in control of some fundamental natural force.

Their appearance usually explains their power. The connotations here are that the character is "as strong and tough as steel", or that they are the cosmic/human equivalent of a Magic Mirror, capable of "reflecting" on the nature of existence and deriving power from it.

Compare Star-Spangled Spandex and Sculpted Physique, contrast with Tin Tyrant. Such characters are sometimes Metal Munchers in order to explain how they got/stay metallic. This is also a common ability for someone with Extra-ore-dinary powers.

These Shy Guys have a layer of silver on them, which is invincible except against Iron Jumps and Spin Jumps, which peel it off.

These Shy Guys have a layer of silver on them, which is invincible except against Iron Jumps and Spin Jumps, which peel it off.