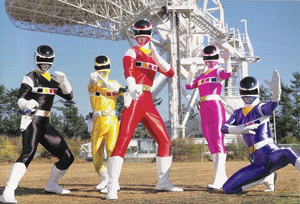 Denji Sentai Megaranger (Electromagnetic Squadron Megaranger) is the twenty-first installment in the Super Sentai series, running from 1997 to 1998.

Kenta Date is a high-school underachiever who enjoys two things: eating yakiniku and playing the "Megaranger" arcade video game. One day, a couple of recruiters show up. It turns out that the Megaranger game is really a simulation intended to recruit people to become actual Megarangers. Kenta is the first person to be good enough at the game to be recruited. While Dr. Eikichi Kubota tries to talk Kenta into accepting, the Earth is invaded by enforcers of the Wicked Electric Kingdom of Nezirejia, invaders from the Twisted Dimension. Due to the emergency, the Megaranger gear is given to Kenta and four of his classmates who happened to be in the area. And the battle begins...

The heroes and their gear are themed after different pieces of digital technology. Manages to avoid being too Totally Radical given the show was made when computers were first becoming mainstream, but technology still marches on.

The series would be adapted into the sixth season of Power Rangers: Power Rangers in Space, and is the 6th Super Sentai to see a US release in October 2017. It can be streamed for free at Shout! Factory TV