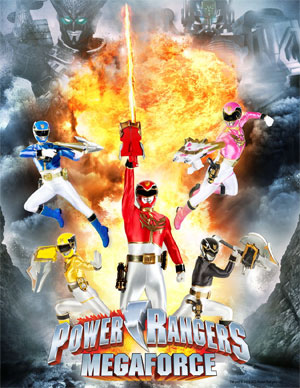 The 20th and 21st (Super Megaforce) seasonsnote Originally Mighty Morphin Re-Cut was counted as season 18; however, as of Megaforce this is no longer true. of Power Rangers The series uses Ranger, Monster and Zord footage from Tensou Sentai Goseiger and a few other elements from Kaizoku Sentai Gokaiger in the first season and reversed the ratio to be primarily Gokaiger-influenced in the second season (called Power Rangers Super Megaforce). Regardless of the exact number, this installment serves as the milestone twenty-year anniversary season

◊. It was also the final series to be executive produced by series veteran Jonathan Tzachor.

Five teenagers with attitude are summoned by Gosei, a supernatural guardian and apprentice to the legendary Zordon. There they learn that an evil alien race called the Warstars are planning to invade Earth, and are granted incredible powers to form the ultimate defense team: the Power Rangers Megaforce!

In addition to fighting the Warstar aliens, the Rangers must also fight off two additional threats: a race of toxic underground beasts, and a ruthless robot army. However, they receive backup in the form of new Powered Armor and an ancient guardian known only as Robo Knight.

After holding the Warstar off for a while, the Rangers learn that they were the pre-invasion force, meant to soften Earth up for the real invasion. These forces are much more competent, and the Rangers (and a lot of the planet) get their asses kicked until Gosei steps up and grants them two new power sets: Super Mega Mode (the Gokaiger suits), which allows them to access Legendary Ranger Mode, enabling them to access the Powers of all previous Rangers, including some that don't exist yet in this timeline (and a few based on early Super Sentai seasons that weren't adapted). With the aid of a mysterious alien named Orion, the Rangers are ready to take the fight to the Armada and unite all the Power Rangers in a Legendary Battle unlike any seen before.

, and the "first look" trailer can be seen here

. The series is also available on Hulu, seen here

Succeeded by Power Rangers Dino Charge. Not to be confused with the film Megaforce or with Denji Sentai Megaranger, the Super Sentai counterpart to Power Rangers in Space.note The Power Rangers Megaforce have been referred to (in an abbreviated form) as "Mega Rangers" on occasion.