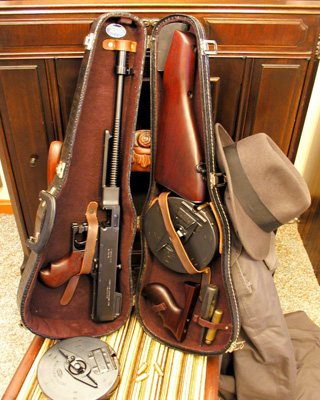 For criminals there come times when a pistol just isn't big enough for the job. However, transporting heavier firepower in a manner that doesn't immediately attract the attention of civilians or the police can be a problem.

This one goes back at least as far as the Roaring Twenties when gangsters used violin and viola cases to transport Thompson submachine guns and sawed-off shotguns. With time more varied weapons have been concealed in this manner up to heavy machine guns and rocket launchers. Even today specialized cases for transporting rifles and pistols can look like musical instrument cases.

This has been done so much that nowadays when some people see a violin case, they assume it contains firearms. Ironically, though, this trope has been Truth in Television, as nobody raised an eyebrow when Steven P. Kazmierczak smuggled a pair of shotguns inside the Northern Illinois University with a guitar case (see below).

Not to be confused with the Musical Assassin, who actually uses an instrument to kill instead of hiding a gun — unless, of course, he pulls the instrument out of the case and proceeds to kick ass like a maestro. Alternatively, you could have an Instrument of Murder, where the instrument doubles as a weapon.

Verges on Dead Horse territory these days, as it's subverted as often as it's played straight.

Also not to be confused with "Psycho" Strings.

See also Briefcase Blaster when the weapon is concealed in a briefcase.

Note: The title is a play on the phrase "senseless violence".