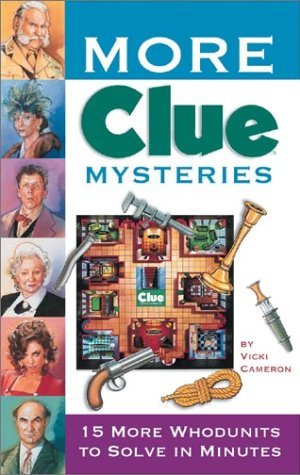 The book series adaptation of Clue, each of its eighteen books consists of mini-mysteries in which Mr. Reginald Boddy and his six color-coded guests, who've been invited over for the weekend, participate in some activity or another which forms the basis of a puzzle for the reader to solve. The books always start with an "Allow Me To Introduce Myself..." chapter, in which readers learn about Boddy and his six guests (and usually how he survived the last book), and tend to set up for the first mini-mystery chapter, while the final story always involves Mr. Boddy's murder and usually (but not always) a theft of some kind. It was released from 1992 to 1997.

A second book series, Clue Junior, consisted of thirteen books released from 1994 to 1998, and featured child versions of the classic characters — Mortimer Mustard, Georgie Green, Peter Plum, Wendy White, Polly Peacock and Samantha Scarlet. The lineup was reduced starting in book 8, retaining Mustard, Plum and Scarlet while dropping White and Peacock and changing Georgie Green into Greta Green. Regardless of the lineup, the characters are always members of the Clue Club, a group of fourth-graders who love reading, watching and discussing mysteries, and playing mystery games (such as "Clue Jr.", their favorite), or just hanging out together. Unlike the original series (which typically replied on the "[suspect] in the [room] with the [weapon]" style of solutions), the cases involve logic puzzles along the line of the Encyclopedia Brown series.

Clue Mysteries and its sequel More Clue Mysteries were released in 2003 and 2004 (with names — John Boddy, Josephine Scarlet, Patricia Peacock, Michael Mustard, Blanche White, John Green and Peter Plum — and characterizations based in the 2002 version of the game and the "Clue Mysteries" spinoff game), each starting out with similar introductions: John Boddy is due to inherit his late uncle's estate, which includes allowances to six people; Boddy intends on cutting off (or at least possibly reducing in Mrs. White's case) these allowances when his inheritance comes through. Each book contains fifteen standalone mysteries that pick up where the introduction ends, and all ask the same question in the end: Who killed Mr. Boddy?

The original series books are:

The Clue Jr. books consist of:

The Mysteries books consist of:

The original series provides examples of the following: