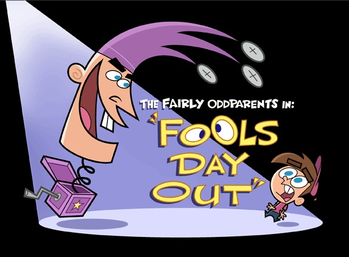 Ah... April the first. It is the day where everyone can pull tricks at someone without worry. It is the time of the year where you let yourself loose and have light-hearted fun.

Some works will have plots based on April Fools' Day, much like the Christmas Episode. Plots will revolve around characters pranking each other. It might be just a bunch of harmless fun. Very often, however, what was intended as a harmless prank might spiral out of control and create real problems.

If the show has a resident Jerkass or Bully, that character might use this celebration to be a douchebag to everyone around them and simply yell "April Fools!" to be immediately immune from any form of criticism. They use the freedom of the day to be abusive towards others by pulling pranks and get away with it scot free! If that is the case, the episode will probably end with the jerk getting his comeuppance ending with "April Fools!" being uttered by the former victim as they pull a prank on the prankster. Of course, there have been variations, with even the prankster getting away with it.

Escalating Wars are not uncommon with these stories. When a whole plot centers around an elaborate April Fools prank played on the protagonist, this also classifies as Friendly Scheming.