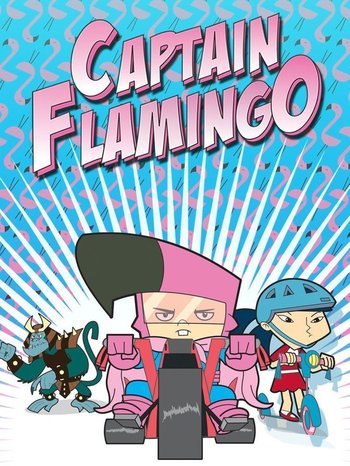 Captain Flamingo is a Canadian-Filipino cartoon from Breakthrough Entertainment made by created by Suzanne Bolch and John May and animated by Atomic Cartoons (who previously also animated Atomic Betty for Breakthrough). The series ran on YTV starting February 7, 2006 and until April 17, 2008 for 3 seasons of 52 episodes. It also aired on Jetix in the United States.

The show is about a young boy named Milo Powell from the fictional Halverston-in-Area neighbourhood of Toronto, Ontario. Deciding to take a stand for little kids everywhere, Milo decides to becomes a superhero. After staring at a lawn flamingo in his backyard, gives himself the identity of Captain Flamingo, which he transforms into any time a kid yells "Uh-oh! Flamingo!" While he has no actual superpowers, Captain Flamingo uses a whole bunch of novelty joke store items, and has help from his best friend, Lizbeth Amanda Zaragoza, who acts as his sidekick and "Bird Brain". Together, they save kids from unusual situations in completely unusual ways.