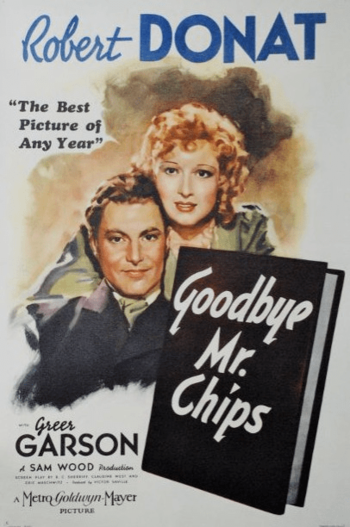 Goodbye, Mr. Chips is a 1939 Metro-Goldwyn-Mayer film directed by Sam Wood and starring Robert Donat as a much-loved Classical master at an English public school near the end of the 19th and the beginning of the 20th centuries. Based on a popular 1933 novel by James Hilton (the author of Lost Horizon, source of another hit film), the film won Donat the Best Actor Oscar in Hollywood's annus mirabilis of 1939 against such competitors as Clark Gable in Gone with the Wind, Laurence Olivier in Wuthering Heights, and Jimmy Stewart in Mr. Smith Goes To Washington.

Chips was the pet project of MGM producer Irving Thalberg, who resolved to give the film first-class treatment — hence, the engagement of an all-British cast (except, of course, for Paul von Hernried (shortly to reinvent himself as "Paul Henreid" of Casablanca fame) as Max Staefel), including the well-regarded English theatre actor Robert Donat and an up-and-coming young actress named Greer Garson, propelled to stardom by this film. Brookfield School was filmed on location at Repton School. Respected English composer Richard Addinsell was engaged to write the film-score, and the screenplay was prepared by Eric Maschwitz, R. C. Sherriff, and Claudine West under the supervision of James Hilton himself. Unfortunately, Thalberg died at the relatively young age of 37 before the release of the film; he is commemorated in the film's main title sequence.

In 1969, the novel was filmed as a rather dreary Musical with Peter O'Toole as Mr. Chipping and Petula Clark as Kathie. Two Live-Action Television adaptations were made, in 1984 with Roy Marsden and Jill Meager, and in 2002 with Martin Clunes and Victoria Hamilton.

For tropes about the original book, see Goodbye, Mr. Chips

Tropes featured in the 1969 Musical include: