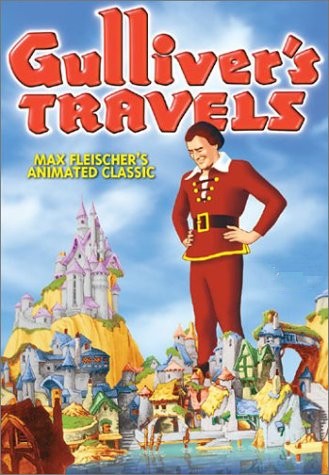 "There's a giant on the beach!"
—Gabby, the Town Crier
Advertisement:

Gulliver's Travels is the second American animated feature ever made.

It was produced by Max Fleischer and directed by Dave Fleischer, both of Fleischer Studios for Paramount, and released in 1939. The animation directors for the film were Seymour Kneitel, Willard Bowsky, Tom Palmer, Grim Natwick, William Henning, Roland Crandall, Thomas Johnson, Robert Leffingwell, Frank Kelling, Winfield Hoskins and Orestes Calpini.

The film is an extremely loose adaptation of the "Lilliput" voyage of Jonathan Swift's 1726 classic, keeping only the skeleton of Swift's story and sugar-coating whatever hints of harsh satire or topical allegory were remaining from the tale.

In an attempt by Paramount to have the film compete with Disney's then-wildly successful Snow White and the Seven Dwarfs, Swift's hard-edged story is made considerably Lighter and Softer by the Fleischers, and his rather unattractive and wholly commonplace protagonist is transformed into a sort of all-wise Mighty Biggie teaching the "silly little people" of Lilliput and Blefuscu a serious lesson about getting along (with World War II about to explode in Europe, and having already exploded in China, perhaps a lesson in getting along was what the nations needed.)

The animation is an interesting blend of the rubbery East Coast cartoon style of animation associated with the shorts of the period, with the more realistic style that had been pioneered by Snow White, which Gulliver was obviously meant to emulate. There are some extremely impressive sequences – the binding of Gulliver by the little people is perhaps a stand-out – and the backgrounds are sumptuous in color and detail, also helped by superbly composed layouts. A lot of the film's entertainment comes from the scenes involving King Little and King Bombo bickering and Gabby the Town Crier's antics, as well as Bombo's bumbling trio of spies, Sneak, Snoop, and Snitch, and the carrier pigeon Twinkletoes, who provide some much needed genuine comic relief. Gulliver also meets the Star-Crossed Lovers Princess Glory of Lilliput and Prince David of Blefuscu, whose separation forms the mainspring of the action.

Victor Young and Ralph Rainger provided score, and there are a number of catchy songs by Al Neiburg, Winston Sharples, and Sammy Timberg, including "It's a Hap-Hap-Happy Day" (which became something of an unofficial theme for the Fleischer Studios, rather as "Merrily We Roll Along" did for Warner Bros. cartoons) and the clever counter-point combination song, "Faithful Forever", formed from the two competing traditional marriage songs of Lilliput and Blefescu, and united at the end to symbolize the union of the happy couple and the now united kingdoms.

This film is in the Public Domain and can be viewed for free online.

This film also spawned a short lived Spin-Off theatrical cartoon series: Gabby, starring the eponymous Town Crier from the film. Another Fleischer short series, Animated Antics, have at least four shorts featuring characters from the film, two centered on the spies Sneak, Snoop, and Snitch, and two on Twinkletoes the Pigeon.

Gulliver was a success at the box office, but not quite enough to cover the overheadnote  This was due to Paramount deliberately discounting the money received for the film in Europe before the war had broken out, where Gulliver had also achieved box office success, resulting in the Fleischers immediately starting work on their next and last feature...

The Gabby series provides examples of: