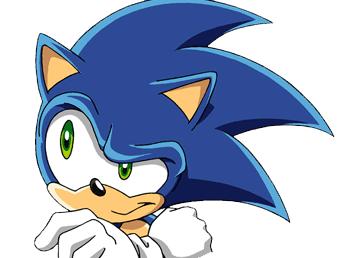 "'Two egg whites that have fused together'? Dude, I'm a blue hedgehog who can run at Mach 10, fight a Mad Scientist who looks like an egg, and make friends with foxes, echidnas, cats, and other hedgehogs. One of them's even in love with me. I don't think Sega cares."
"Has anyone ever noticed that Sonic doesn't have two eyes, but one hideously malshapen eye with two pupils? Seriously, look at it! There's nothing dividing his eyes, it's like two egg whites that have fused together."
— Linkara, Atop the Fourth Wall
Advertisement:

Eyes say a lot about a character. Color, size, and even placement can tell you if the character's built for a certain genre. For example, eyes set very close together tend to belong to characters destined for cartoon fantasy.

Sometimes artists go overboard and draw eyes where the sclerae meet in the middle, with the two pupils still occupying their own sides, never crossing into the other. With this particular physiology, the character actually has "pupula duplex", or one gigantic eyeball in their head with two pupils on it.

Funnily enough, this passes as an Acceptable Break from Reality as the eyes, strangely constructed as they are, still do the job of conveying emotion just as well as separate eyes do. Although nobody in-universe ever seems to point out how strange it is.

Compare Sphere Eyes, which uses two giant eyeballs that have either tiny little dots for pupils or just normal pupils.