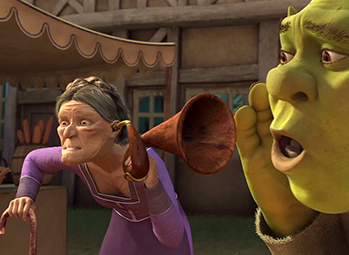 WHAT?! YOU'LL HAVE TO SPEAK LOUDER, SONNY!

(or Ear Horn) is a very old-fashioned type of hearing aid that was first invented in the 17th century. For the most part, they exist only as relics of older eras. However, they still serve a purpose in fiction.

DANGIT, KIDDO. YOU'RE SPEAKING TOO LOUD! THESE OLD EARS ARE SENSITIVE YOU KNOW!

Oh for the love of—

There are usually three types of Ear Trumpets in fiction:

Frequently accompanying an I Can't Hear You gag, and, if on the phone, a Funny Phone Misunderstanding.