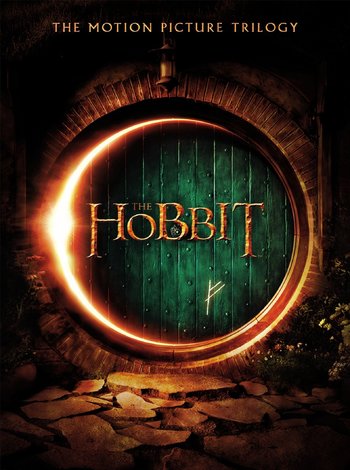 Gandalf: You'll have a tale or two to tell of your own, when you come back.
Bilbo: Can you promise that I will come back?
Gandalf: ...No. And if you do, you will not be the same.
— An Unexpected Journey
Advertisement:

The Hobbit is a three-part cinematic adaptation of J.R.R Tolkien's classic High Fantasy Adventure novel of the same name, directed by Peter Jackson and adapted for the screen by Jackson and Guillermo del Toro. It acts as a prequel to Jackson's own Epic Fantasy Trilogy adaptation of The Lord of the Rings, telling the story of eponymous hobbit Bilbo Baggins's adventure with the wizard Gandalf and a company of dwarves to reclaim the dwarves’ former mountain home and its treasure from the dragon Smaug.

The film trilogy primarily covers the events from The Hobbit, but also features various elements derived from or inspired by Unfinished Tales and the Appendices of The Lord of the Rings. Such examples respectively include Gandalf's true motivations for helping the Dwarves retake Erebor from Smaug, and a sub-plot involving the White Council taking action against the Necromancer in Dol Guldur, which is hinted at in the book, but expanded upon in the aforementioned Appendices. All three films were filmed in stereoscopic 3D, and in a cinematic first, at 48 frames-per-second.

Far over the misty mountains cold
To dungeons deep and caverns old
We must away, ere break of day
To claim our long-forgotten gold

Far over the misty mountains cold
To dungeons deep and caverns old
We must away, ere break of day
To claim our long-forgotten gold