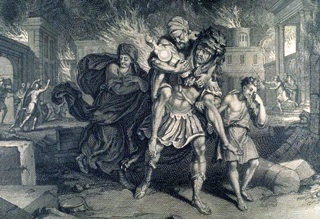 Don't worry Aeneas, you'll make those Greeks pay.
"Beneath an ancient laurel tree in the courtyard of King Priam’s palace stood the altar of Zeus. It was there that Hecuba gathered her daughters for sanctuary when they were woken by the din of the invading army and the shouts and screams in the streets below the palace. Frail as he was, Priam wanted to bring his spear with him, ready to hold the Argives off, but Hecuba held on to him, wailing that it was madness for a feeble old man to join the fight. So they were standing together beneath the tree, trembling at the terrifying noises rising up from the city."
— Lindsay Clarke, The War at Troy
Advertisement:

Watching Troy Burn is what the heroes do as they see a home or place they care about being attacked and possibly even having already been destroyed. And the thing that makes it so heart-wrenching to them is that for some reason, there's nothing that they can do about it. This trope is often paired with a camera technique to personalize this and drive it home to the viewers, who (let's face it) have likely been desensitized to this sort of thing. The camera will show the heroes approach a cliff/window and get a Reaction Shot of each, then turn and take a good, long look at the burning/ruined panorama, zooming from behind the heroes to a bird's eye view. They'll likely stand agape, The Chick will likely cling to The Hero and turn away from the carnage, and at least one hero will fall to their knees and/or scream to the heavens.

It doesn't have to be their actual hometown, or even a town, though it can be and this makes it hurt all the more when a war unleashes chaos and destruction on the homefront when the war was supposed to be far away. A bad guy thrashing the hero's secret base, a Base on Wheels, or a friendly king's castle can have the same effect. Basically, any landmark/large object/population center the heroes have a large emotional attachment to can be the "Troy." That said, burning a place that is physically gorgeous like the Shining City can have double the emotional impact. Villains into Evil Gloating will likely enjoy forcing a captured hero watch the destruction.

The placement of Watching Troy Burn in a story changes its intended effect. When used at the beginning it's a Doomed Hometown, meant to make it personal for the heroes. In the middle of a story, it ups the emotional stakes, Anyone Can Die and this Big Bad is not a Harmless Villain whose defeat will ensure no harm happens. In the end, and it's likely a cause for a Downer Ending or at best Bittersweet Ending. May lead to The Ruins I Caused, although often enough the hero is not given the chance to look back. This trope is often caused by Trouble Follows You Home

This trope is named for the city of Troy, which after years of being besieged was penetrated by the Trojan Horse and razed to the ground. All over Helen.

Often preceded by All Your Base Are Belong to Us. See also A Million Is a Statistic. Contrast While Rome Burns, for cases where the characters show a nonchalant attitude about the destruction.

As you can guess, this is a Spoiler trope, so read the examples at your own risk.